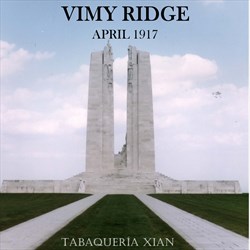 Notes: In April of 1917, the First World War, today remembered as "The Great War", seemed without end. German forces were dominating the war, and the situation did not look good. Many newly independent countries joined with G>reat Britain to defend Europe from the German aggression. For many of these countries, this was the first time they had to test their military overseas. The Battle of Vimy ridge, in the area of la comunade Givenchy-en-Gohelle, near Vimy, France, lasted 3 days, from the 9th to the 12th of April, 1917. 3598 soldiers, mostly Canadians, lost their lives trying to take the ridge, while, another 7004 were wounded. Casualties remain unknown on the German side.
This blend is in honour of those young soldiers, many little more than boys, who sacrificed so much almost 100 years ago.
It is a blend of Cyprus Latakia, Burley, and Virginia, with a wee bit of Golden and Black Cavendish for texture.

Please login to review this blend.