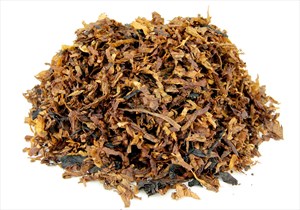 Maple Walnut starts with a blend of Burley and Virginia which is topped with the warm sweetness of maple, and the mellow nuttiness of walnut. This is a smooth-smoking, old-fashioned type tobacco.

Some of the blend's a little coarse, but the majority's mid-size ribbons. The colours are mostly medium browns but there's a few black and yellow pieces. The moisture's exactly how I want it: a little moist, but easily smokeable.

I enjoy the smoke. This is led by the Burley's nutty/toastiness, but the black Cavendish imparts a gentle vanilla touch. I find the Virginia easily the lightest, the only traits I get are in the Virginia Cavendish, not natural Virginia ones. The toppings would make this better suited to more foolhardy, aromatic, smokers among us. The maple sits a little in front of the walnut, giving a strong sweetness. The walnut flavour isn't just 'any old nut' one, it's oily, quite creamy, and rich: walnut. Maple Walnut burns very well, independent, and cool, giving a bite free smoke.

Maple Walnut? A strongly flavoured blend, but the flavour's a very nice one! Highly recommended:

Maple Walnut by Sutliff is not a bad pipe tobacco blend at all, in fact its a perfect all day everyday kind of a smoke. The reason why is because its very basic but covers a few things in the pipe tobacco bases, I am a Lanes Buttered Rum and Sutliff Rum n Maple guy all the way so when I give my description of this blend it is sourced from those two. The first base is the smooth creamy smoke it delivers but only after some drying time, it does come alittle to moist at first so I wanna give you a heads up on that. The second base is that it will be sweet and tasty, the balance between the maple and walnut is actually done very well, you will taste the maple but its not over powering and in the background is the walnut or what is supposed to be walnut, either way it does deliver the taste title. Base number three to a home run is a all American old fashion aromatic that is sure to please in quality because its not junk tobacco and reminds me of old school American pipe tobacco that our grandfathers would of have given a thumbs up to. The nicotine level is only moderate and the room note is pleasant but all in all a well rounded pipe tobacco but very simple and tasty, so if you like maple you will enjoy this blend. This is in my everyday rotation and I enjoy Maple Walnut very much but again the key to this blend giving you the best smoke it can deliver is to dry it out for at least a couple hours, trust me its moist enough to hold its own until its time to smoke it. I recommend this to a novice pipe smoker because its sweet, smooth and truly is a nice smoke but don't expect it to blow your socks off with a super complex taste because its simple. God bless you and thanks for reading my review, God bless America and remember to stand up for your smoking rights and support your American tobacco farmers because they need it, take care and bye for now until the next review.

GENERAL- 4/5.....Overall its a pleasant smoke. For the most part it smokes cool no matter the pace and stays lit. It seems to smoke better at a faster tempo as the creaminess and flavor of the smoke grows as the the tempo does. The smoke is a nice creamy maple flavoring which puts me smack dab in the middle of a waffle house. It smoked very well inside my MM Pride straight pipe. The best part of the smoke for me, however, is the retrohale which imparts this rich nutty taste which is quite pleasant. The burley is the star of the show here especially noted on the retrohale as mentioned before. The virginia leaves a faint sweetness of hay, but it gets buried by the maples, burleys, and walnut notes. Imagine sitting in a waffle house sipping maple syrup while eating peanuts, sounds crazy but thats the best way to describe this blend. Overall it's a pleasant smoke and I would buy again!

Tin Note- ONE NOTE OF MAPLE

The very nutty, earthy, woody burley is the lead component. The Virginia provides some tart and tangy citrus, bread, sugar, grass, light earth, wood, and a floral note as a supporting player. The creamy sugary black cavendish is right behind the red Virginia in terms of effect. The maple walnut toppings fairly tone down the tobaccos while allowing them to have a say in the proceedings. The walnut is a little more prominent than the maple. The strength is in the center of mild to medium. The nic-hit is a step behind that. The taste is a rung below the medium mark. There’s no chance of bite or harshness, but there are a few very small rough edges. Burns cool and clean at a moderate pace with a very consistent, rich sugary, nutty, maple, fruity flavor that translates to the short lived, pleasant after taste. The room note is pleasant, too. Leaves little dampness in the bowl, and requires an average number of relights. An all day smoke. Three and a half stars.

I don’t smoke many aromatics. Mostly English and VaPers. This was a gift. It was bulk in a plastic bag. The plastic didn’t contain the tin note. I had it in a cabinet in our living room. My wife asked me if I had spilled any maple liqueur or syrup in the cabinet. I transferred it to a canning jar, aroma contained. I liked the maple aroma; I didn’t notice the walnut. It was moist, but it lit well and burned to the bottom leaving a fine gray ash with no gurgling. Interestingly, I could taste the walnut, but not the maple. The tobacco flavor was good but not complex. It produced sufficient volumes of mild smoke with no bite. I would give it 3 stars.

Purchased From: Received as gift, but it came from Smokingpipes.com

Another candidate for my favorite aromatic. A break from the rum/maple blends and tastier IMO than all those. This one handles and smokes well, doesn't bite, but has no chemistry. It does have enough aromatic quality to lend it to blending with a stronger tobacco and make it work for flavor and potency. I've not yet done so but may in the future on my quest for smoking perfection.

Purchased From: p and c

Pleasant stuff, no tongue bite. The walnut taste is of the semi bitter skin on walnut meats. After smoking, the room smells pleasantly of maple syrup.

Maple Walnut is an "older" blend from Sutliff; similar to Maple Street and Rum & Maple. As noted by others; you get maple on the intake, and walnut on the retro. The blend is kind to "Puffers", and improves when "smoked hard". I have never been bitten by this blend, even when used in a "The Pipe".

Oh man this sounded so good when I ordered it. That's exactly what I want, PANCAKEs in my pipe!! Um....wait... To me, its kinda weird. Hard to explain. Now it isn't like skinny dipping in maple syrup and rolling around in a waffle factory, yet there is maple. It's subtle, but it's there. The walnut is there too. Honestly, I think there is more walnut/woodiness than maple. I'm gonna have to wrestle with this one a while. It's not like you think it's gonna be straight from the start. The room note may be the real maple deal here, although my wife said it was so soft she could barely tell. She thought it was butter rum. Not a bad blend, but as I said, a weird one. I think the complexity is more than I had originally thought by it's name.

Edit: This is also nice with a pinch of S.Value English thrown in a Ziploc and shook up

Edit#2: I had some sealed up for about a year now, and have really been wanting to smoke it with the cool weather in hand. Man I was disappointed. It tasted like a cigar dipped in sugar water. Something about this topping/tobacco did NOT do well in a mason jar (yes clean, yes temp controlled, yes dark) for a year. Maple odor was only a hint in the jar. Moisture level was I'd say, perfect. 3 diff pipes, all dumped out. Shame, this was a pretty decent blend new. Maybe this is just a buy and smoke proposition.

Purchased From: p's and c's

It's fall and I decided to try something different for an aromatic. I bought a bunch of 1oz samples of Sutliff aros during a sale so I'm going to smoke my way through the fall/winter and review them.

When the box arrived, you could smell the combination of aros as soon as the seal was broken. I decided to try Maple Walnut first. Opening the ziplock, the smell was very maple. The tobacco was a ribbon cut of dark browns and black strands. The moisture content was high to my liking so I took some out and let it dry for a couple of hours. It was easy to pack and took a light quite easily.

In the smoke I picked up much more of the walnut than the maple even though the maple was obviously in the room note and somewhat on the retrohale. With little effort it smoked decently cool and without tongue bite. The smoke was consistent all the way through and it left just a little moisture in the bowl/stem. It could easily be an all day smoke as it doesn't require a lot of thought and provides a good smoke.

I really like cutting this with about 25% CD Cube Cut Burley. Helps the burn and makes it taste like Pancakes.

Age When Smoked: fresh from bag

I wanted to like this blend because I love both maple and walnuts. But, I don’t find much maple and a little overdone on the walnut to the point it’s like eating that one bad piece of walnut in the bag that might be a little rotten.

I like nutty flavors, especially in a burley, but this isn’t my cup of tea. I don’t mind aros, but smoke them less than I thought I might. Being a cigar smoker before pipes the flavor thing was questionable, I liked it, then I didn’t, now I appreciate them and certainly have some favorites.

The tobacco is moist as expected, but smokable out of the tin. I did find drying at least a half hour, if not longer, helps the burn and flavor a bit. I did find that if you puff too hard once or twice - poof - your aro is now smoking nothing worth smoking as it gets a bit chemical.

Just because I don’t recommend it doesn’t mean you shouldn’t try it if you’re thinking about it. I just wouldn’t plan on too high of hopes for maple/walnut as you most likely think about it.