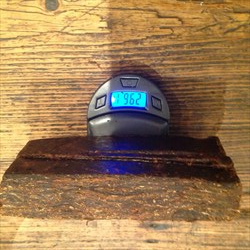 Brown Plug with the wonderful addition of sweet and potent Navy rum.

The Virginias sport a deep dark fruit sweetness with a lot of earth, and a light floral vegetativeness. It also has a minor grassiness. In an ever present supporting role, the burleys offer a a deep earthy nuttiness, and a little molasses. Here and there I got a very minor sense of cocoa from the burleys, too. The sweetness of both varietals have a fermented feel to the sweetness. The rum has a deep sweet richness, and only mildly sublimates the tobaccos. Unlike some topped plugs, the rum never weakens at any point in the proceedings. The nic-hit is almost medium as the rum does tone it down just a mite. Won’t bite even if you try. The plug may take a little effort to prepare, but it’s not hard to break apart to suit your cutting preference. It may need a light dry time, though I did not find that necessary. Burns slow as plug tobacco often does; cool, clean, very smooth with a very consistent flavor. Has no dull or harsh spots. Leaves little moisture in the bowl. Has a very pleasant after taste that lingers a little and the room note is pleasant. It has a fair amount of strength, but you may find yourself smoking it several times a day.

Superior in flavour and smoke to the Flake version. The plug exudes 'Rumness'. If this tobacco was supplied to any Navy these days I would join up. I have a little left of my 25g which has become my favourite "I'm pleased with the day" smoke. It could easily become my daily smoke, lighting up is a doddle, a cloud of fragrant smoke appears and my mouth and tongue are filled with warm rum and tobacco. What more can you want in a Navy baccy? Rate this very highly. A full 5/5

Nessmuk Plug is firm and not too moist making it easy to shave off some thin flakes for smoking. I needed to dry it for a little while prior to smoking. It is my preferred way to smoke this particular plug. I have to admit that at first light I found myself looking for the sweet rum. At first it was very earthy, but a short way into the bowl, the rum and sweetness came to the forefront and I suddenly understood why pipers enjoy this plug so much. It only has a moderate amount of strength and I think that JimInks’ comments are dead on as my experience was very similar. It burns cool, it holds the rum flavor, there isn’t a hint of a bite to be found. The flavor is constant and offers little complexity, but the flavor is so deep that I didn’t miss it. I would really love the chance to taste the flake version of this blend if it is still produced. Nessmuk is my favorite plug from GH thus far!

As with most plugs, this demands meticulous preparation but once it's lit the hard work more than pays off. It's not particularly wet, it's about the expected moistness for a plug; I slice a few sheets of tobacco, crumble and give it a short time to air. It smells of rum but it doesn't have an overly potent aroma, it smells flavoured but not too aromatic. After a little drying time it looks good to go so I fill and light and then the extra preparation time really seems worth it.

I find the flavour has a pleasant rum addition to it, albeit it doesn't seem too potent; like the aroma, it's enhanced but not over the top with falseness.

This has a good nicotine kick, it can be quite strong if big puffs are taken.

A bowl of Nessmuk burns very well, I only really have to use occasional tamps to keep it in line.

The room note from this is nice. A nice aroma and not too much smoke in the room.

As plugs go this is up there with the best I've had: highly recommended.

Sadly, this was discontinued by G&H when the the new EU regulations on database additions came in force this month. I'm hoping that this review will prompt likeminded individuals to mercilessly bully G&H into making it regularly... :D

This is G&H Best Brown Flake, but it is uncut and topped with rum. After I heard that production was to cease, I did two things; 1) I tried G&H Dark Plug (Rum) to compare. It is a completely different animal. 2) I organised a group buy of a kilo to keep several of us in stocks until such times as G&H can be convinced to do regular runs of it.

It's a fantastic navy plug; cool-burning and with no bite, and with a beautiful beard note. It was invented by a good friend to appeal to the outdoorsman, and as one, I can assert that it hits the spot nicely. The initial moistness is typical of anything by G&H, and disappears after a bit of jar time. Highly recommended for both beginners and old hands alike, you can't be disappointed with this if you like good, old-fashioned navy plugs.

Age When Smoked: New and 1 year

Having heard some good things about this tobacco, I ordered 50 grams.

The appearance of this plug is what one would expect, although quite a bot thicker than the other plugs I have tried. Brown plug as hard as a brick & requires use of a very sharp knife to cut through.

The pouch note I got from this tobacco was very pleasant & consisted of a good tobacco scent with a very strong rum scent mixed in. Very pleasant.

Having sliced it, I managed to get some flakes off it which were thin & uniform enough to fold & stuff. The rest was rubbed out. Either way it took the flame well, and needed few relights & only a little maintenance. I didn't find it particularly damp, but a short drying period of around half an hour to an hour is still recommended to ensure optimum burn without drying out all the flavour.

The taste is predominantly tobacco, the rum adds an interesting twist to the taste, but is not nearly as strong on the tongue as the pouch note would suggest. The tobacco itself is, as expected from this company, immaculately prepared and very tasty. The dark tobacco note, with a sweetness beneath it, enhanced by the rum casing, but in no way overpowered by it. Due to the flavouring of the rum being a bit meeker than expected, this doesn't ghost a pipe at all.

The strength is medium, which is not as strong as I expected it to be, which is good, as it allows a larger bowl to be used.

The room note is perfectly pleasant, nothing overpowering or dense about it & tends not to linger too long either.

Overall, a very pleasant smoke. The only gripe I have is that the plug is so thick that even using a new good quality knife, getting an even cut all the way through is difficult, meaning I had to rub most of it out rather that stuffing & folding, which would be my preferred method.

I will definitely be getting some more, I enjoyed it, and will give it a well-deserved 3 stars. The only reason I will not be giving it 4 is that I am reserving those ratings for tobaccos which really rock my world. This was very good & I recommend any & all to try it, but it's not spectacular enough to rate 4 stars for me. Pairs well with just about anything for me, from a cup of tea to a single malt.

Similar Blends: Gawith, Hoggarth & Co. - Brown Plug (which it basically is, with some rum casing added).