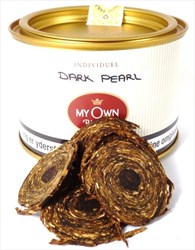 Orlik and My Own Blend are both brands owned by Scandinavian Tobacco Group. Since many requests for the Orlik Bulls Eye they decided to bring it back on the Danish market. So here you go: A beautiful tobacco with dark and light Virginia tobaccos, blended with perique then pressed and aged. After the ageing it is spun around a core of aromatic black cavendish.

I, like many people, was gutted when Orlik Bull's Eye was discontinued. I couldn't understand why such a beautiful blend like this had been stopped and the only thing left that would really hit that spot was Davidoff Flake Medallions. Now, the Davidoff offering is a very enjoyable blend but I find the U.K. price a bit off putting.

I had intended cellaring this for a while but when it came I felt so enthralled I just had to get a pipe going!

The aroma from the tin is the same as Orlik's, slightly figgy and dried fruit like. I can't think of much more to say about that!

That's the same but an area where this beats Orlik hands down is moisture. I would often find my Bull's Eye to be a bit moist and a little stuck together but the Paul Olsen packaging is much more roomy, allowing the coins to breath somewhat. Although it's nowhere near as aesthetically pleasing it makes for a far easier blend to light.

I always rubbed my Bull's Eye coins fully. Even though it can burn a touch hotter like this I enjoy having my Black Cavendish centre fully distributed. I prepare Dark Pearl in the same fashion and when I get it lit it more than hits the spot.

Even though it's been fully rubbed out the smoke's still pretty cool. I have to push it really hard for it to even become medium in temperature.

The flavour is identical to the Orlik version: There's a subtle sweeness from the Black Cav', a good hay note from the Virginia and a noticeable spice touch bought to the mix by the Perique. After about half of the bowl a sort of plum like flavour comes forward too.

The nicotine sits slightly above medium for me. Even though it's easy to identify the N I can't see it offending many people.

This is my idea of smoking perfection. It's like Bull's Eye without the need for airing it from the tin. Highly, highly, highly recommended.

The rather citrusy, lightly dark fruity Virginias also have some grass, and a little earth as the main component. The spicy, raisiny, figgy, lightly plumy perique plays an important second lead. The lightly vanilla black cavendish in the center is small, and while it helps smooth out a few rough edges (though a little of that remains), the composition makes for an inconsistent flavor, unless you are very careful in you preperation. The strength is medium, while the taste just passes the medium threshold. The nic-hit is in the center of mild to medium. The coin is easily rubbed out to suit your preference. Burns fairly cool and clean at a moderate pace with a a little richness in taste. Leaves very little moisture in the bowl, and requires slightly more than an average number of relights. Has a pleasant, light lingering after taste. Not quite an all day smoke.

Olsen's blends, which can be had at the venerable Danish Pipe Shop, are all excellent and much neglected. Dark Pearl is essentially the same idea and recipe as Stokkebye Luxury Bulls Eye, and Davidoff Flake Medallions. Virginias wrapped around a small core of Cavendish. This is close to the Stokkebye blend. The Virginias are darker and pressed more. The entire blend is richer and bit less sweet. The taste is rich and creamy, and the Cavendish is noticeable but the sweetness is subtle. This is just top flight stuff and like their Big Coin (a version of escudo, really) it deserves much wider appreciation.