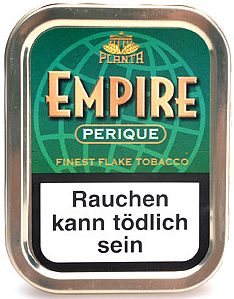 Finest perique is the main player here, supported by dark fired Virginia and a pinch of Oriental tobaccos. A highly aromatic pleasure of typical perique character.

Upon opening a tin of this, the immediate scent is very very sugary. Some of this is undoubtedly from the tobacco, but the syrup casing is very apparent from the get-go.

The tobacco rubs out easily. I found that these had to be rubbed out rather than folded & stuffed, as the flakes are rather thick-cut, so unless rubbed at least roughly, is rather troublesome.

The tobacco takes the flame quite easily when rubbed out to a moderate/thorough degree, and provides a low-maintenance easy smoke.

The taste of the smoke is similar to the tin note (at least initially) in that it proves a very sweet, saccharine, slightly honeyed flavour. It works well with the tobaccos, but is somewhat more prominent than I feel it should be. This is a common occurrence amongst German tobaccos (in fact a large percentage of continental European tobaccos), the casing should be a side-note, IMHO, and not affect the flavour to this degree. If indeed it is only a sugar syrup that has been applied (the description says no added flavour), I'm gonna give this a mild/medium 'added flavour' rating as it affects the smoke most definitely. As with most flavourings, the sugary notes dissipate largely after the first third of the bowl & the tobacco takes centre stage, becoming a fairly muted spiced bread flavour, as to be expected from a VaPer flake. It stays that way until the end of the smoke. The mouthfeel of the smoke is full throughout & this can either be sipped or puffed heavily on, I found it most forgiving.

The room note is quite civilised, light & typical of a VaPer with a bit of added sweetness.

The nicotine in this one is medium.

I'm going to give this 2 stars, I was torn between two & three, but after consideration, whilst the smoke is not bad & the sugar syrup is not something that can really be considered an 'artificial flavouring' it has been overused to the degree that the first 33% of the bowl is not as pleasing as I feel it would be if the casing was moderated. It's not a bad smoke, and may be most suited to those moving away from aromatics to straight tobaccos, but for me it was overly sweet, and not due to the tobaccos. As stated earlier, this is something which should be considered when buying continental European tobaccos. Pairs well with Dark teas of any sort, where a shot of bitterness counteracts the sweetness inherent in this flake.

In the tin we find neat, tight, horizontaly layed, dark, subdue in appearance-flakes. No surprise. A surprise to me, however, was the odor straight from the tin. Figs? Very nice. Rubbed out, the Empire is perfect to the touch - not dry, not moist. It lights well and stays lit. Exhaled smoke smells so nice, is invites a rerun, yet no casing detracts from a natural tobacco flavor. Very nice. Midbowl, a peppery not takes over. Unexpected, but OK. Endbowl, BAM, the rush hits me.

Nice smell of sweetness, roasted nuts and the typical Perique tartness greets you when you open the tin. The flakes themselves are arranged in a sideways fashion in the tin (meaning they are more broad than long) and cut slightly thicker than seems to be the norm. The use of dark-fired Virginia lends the blend a subtle smoky flavour and the Oriental prevents it from being just another Vaper. There seems to be a good amount of Perique present as well, peppery and fruity. A smooth smoke, full with taste and no tongue bite.

A competent VA/Per, from Germany's premier saucerers. Amazingly, no sauce in there apart from whatever they apply to the Perique in Louisiana.

The Empire series of blends by Planta took my by surprise, since I know the company mostly for their so-so aromatics. So, had to try. Opening the tin, I find two rows of pretty small slices that are the same format as most of DanTobacco's flakes... maybe a connection? Anyway, the tin note is sweet, some floweriness from the Orientals, and the slightly sour-ish bread notes from the Perique.

Folding is not much of an option, the slices are too brittle to do that properly, so I rub out. A test with a folded slice had me constantly re-lighting. Rubbed out, only few relights are necessary. The flavour starts out with the VA clearly identifiable and the Perique up front (the way I like it). The Orient comes out about half-way through the bowl, and occasionally pops up in full force, only to go into the background again after a few puffs. Interesting smoke!

I have no dottle left at the end, little condensation, and a nice room note. Good stuff, and I may come back to this blend.

This is the exact same tobacco as "Peter Heinrichs Reserve Crue No. 9 Perique Flake". Planta produces them and they let Peter Heinrichs sell it as their house-blend. I'm curious if it's also available under any more different labels!

So this is the same review: Opening the nondescript tin, with the inconspicuous design of which more(!!) than the half label is the damn warning sticker these days........, I find a lovely and classy golden sticker in form of a tobacco leaf that's for closing the greaseproof paper (similar to the ones for packing breads for school or work) inside the tin.

Inside there are two stacks of small almost square slices that are cut at about 2mm thickness. It's easy to identify the dark fired (Virginia) leaf in it, as the flakes are very dark. Black, dark brown, some brighter brown speckles and only very few, small dots of golden-yellow.

The tin note is intriguingly piquant-fruity. A decent smokiness forms the base of the scent, accompanied by a fruity, slightly sour aroma with mild, honeyish sweetness to it. You can also identify the Orientas clearly scent-wise, as they offer a distinctive woodsy-sour, very herbal, decently ethereal aroma. Complex tin note, that makes you want to load a bowlful.

The tobacco itself needs 30mins up to 1-2 hours of drying time, depending on personal preference. Yet it is smokeable right out of the tin.

On first light I got hit by a rich nuttiness that is underscored by decent woody and earthy undertones. After a few puffs the Perique makes its presence known by contributing a slightly fermented fruity aroma, reminiscent of figs, dates and maybe a whiff of ripe oranges. Intensly earthy, with a good share of woody-smokiness to it. Very piquant and peppery, herbal spice to it. Ethereal in character.

The rich fruitiness and the tasty nuttiness are married in perfect harmony and complement one another excellently. It's like raisins and nuts - they just harmonize so well! Underscored by the ethereal, herbal, and smoky-spiciness this is a unique blend with a genuine aroma to it. At half-way through the bowl the fruity,herbal and nuttydimensions are tamed just a bit and make room for the smoky, woody and peppery sides of this blend shine a tad more.

Smokes cool, doesn't bite and if smoked at moderate pace it never gets harsh.

Highly enjoyable, it has a very "exotic and oriental" feeling to it. The aromas of this blend are unlike most other Va/Per blends, and convince with its genuine flavor profile that's taking you to fairytales of 1001 nights!

No doubts, for me this is a special Perique Flake, that's a 3,5/4 star blend. Genuine, moderatly complex and very sophisticated! Highly recommended for Va/Per lovers who like a Oriental touch to the blend, as well as to English- and Oriental smokers, who like an exotic extension for their rotation.

Not bad tobacco. Ordinary Perique flakes with oriental support. Easy smoke, require few relights, leaving some moisture at the end. Not an all day. Worth to try, but not to buy again, it's a lot better alternatives around