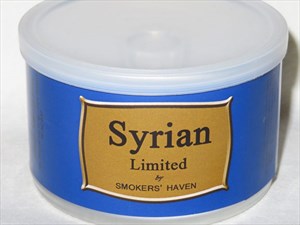 Sweet, Smoky, Satisfying, Luscious, Balanced. This is our new and very Limited edition blend, Syrian Limited. Combining 12 year old aged Syrian latakia with a very fine cut of nectarous Virginia, matured to perfection, and just enough Orientals to taste them in the background and you have an all day smoke that can't be duplicated. This is a short run blend due to the high quality of the limited ingredients. Enjoy Syrian Limited while you can!

The deeply rich smoky, woody, dry wine-like Syrian latakia is the star component, though this is no lat-bomb. In an important secondary position is the dry, buttery sweet, woody, earthy Orientals, which also sport a touch of spice. The aged Virginia provides some grass, citrus, a touch of dark fruit, and has a light fermented quality and is mostly a background player. The nic-hit is almost mild to medium. No chance of bite or harshness present. Burns cool and clean with a lot of flavor depth that remains consistent from start to finish. Leaves little dampness in the bowl, and requires an average number of relights. Has a pleasant, lightly lingering after taste. Not quite an all day smoke, though an experienced smoker of English blends may find it so.

Upon opening the tin, I was greeted with a surprisingly fruity odor. I was expecting more of a Latakia (woodsy, smokey, leathery) aroma—you can detect the Latakia, but it’s mild. The ribbon cut tobacco was a mix of light and dark. A very pleasant smoke, sweet, flavorful and complex that increases in complexity and flavor as you work your way thru the bowl. Nic hit is mild. I am reminded, quite a bit, of Syrian Star, with its strong Virginia presence, and added Syrian Latakia and basma that enhance the smoke. The Latakia here also strikes me as a condiment, with the Orientals adding an extra dimension—in a very positive way. Very, very pleasant room note! Doesn’t bite. Great all day smoke, but given its limited availability, I’ll just go ahead and savor this over some time! Oh my goodness, but this is one fine blend.

This blend was introduced at the 2015 Chicago Pipe Show. Premal finally had something to make me smile when I asked if he had any Krumble Kake. He was limiting purchases to one tin per person per day at the show.

This was a limited run that, if memory serves me right, came out right before it became widespread knowledge that Syrian Latakia would soon become a thing of the past. Had I known that at the time, I may have bought more the next day. Not necessarily because I liked it, but more due to the collectability and value.

I have never been one to prefer Syrian to Cyprian anyway, so the loss of the former has had little effect on my smoking. I will say that at the time this one came out, almost any new blend featuring Syrian Latakia had very little of it in the blend at all. In most cases, it was hard to detect. That is not the case with this one. I would agree with Jiminks that it is not a lat bomb, but it is the primary player and it is prominently featured.

It is just as difficult to explain the taste of Syrian Latakia as it is to explain the the taste of Cyprian Latakia. For me (and many others), I associate Cyprian with a campfire aroma; whereas Syrian has more of a wine-like aroma/taste. As was mentioned earlier many of the Syrian blends at this time contained Syrian diluted with Cyprian or combined with several other orientals, so that wine-like taste often hard to perceive. That is not the case with this blend. A smoker will instantly understand what is meant by wine-like aroma/taste when they start into a bowl of this. The orientals are very restrained and the Virginia is just there to add some sweetness to the palate and to the delicious sidestream.

The sidestream on this blend is nice. It is not the best I have ever had, but many moments were spent sniffing over the bowl between puffs. As Syrian is not my preferred lat choice, this is personally a three star blend for me when it was available (and it wasn't cheap then). With the realities of the market today as both a limited blend and a blend containing Syrian Latakia, I imagine it would cost a small fortune to get a tin of this. Thus I would personally drop this to two stars as I would not pay that kind of money for this, but if you are someone who has never tried Syrian Latakia and you would like to know what it is like, then I would Highly recommend this one since you will be paying a lot anyway. If you are going to pay that kind of money, you definitely want to taste the Syrian and this will do it. So for that person it is a four star.

So, with any of these blends that aren't made anymore the rating is seriously subjective based on factors other than taste and performance alone. I will leave it at an objective three stars as any lat lover should enjoy this.